Different Types of Hair Loss and What They Mean

This is not only in the sense of appearance; as in, man A) has a widow’s peak, man B) has a bald spot on his crown and man C) is Kojak; but in the way hair loss affects an individual on a psychological level.

If you’re one of the numerous men experiencing hair loss, you’ve probably felt some sort of way about what’s happening up top, whether it’s catching your reflection and thinking “oh well”, studying your hairline and running down the road screaming, or something in the middle.

But no matter what, one of the best methods of dealing with any big life change is to try and understand it. That’s why we’re breaking down different types of hair loss and looking into what they mean.

The vast majority of men who experience hair loss (90% of them) do so because of male pattern baldness (MPB). It is extremely common and caused by a combination of hormonal, environmental and—for the most part—genetic factors

While external stuff like stress, binge drinking and beige food have been linked to thinning hair, 80% of male pattern baldness cases come down to genetics. So even if you’re eating right and maintaining a heightened state of permanent chill vibes, the invisible hand of hereditary makeup could still lessen your locks.

While external stuff like stress, binge drinking and beige food have been linked to thinning hair, 80% of male pattern baldness cases come down to genetics.

But why? Well, because your genetics decide how much of an effect hormones will have on your hair follicles. One of these hormones is called Dihydrotestosterone (DHT), an androgen—the collective word for male hormones—that shortens the growing phase of hair follicles. The more sensitive your hair follicles are to DHT, the slower your hair will grow until, eventually, new hair cannot replace the old.

In short, MPB means one thing: you’re experiencing something very, very common, and it’s probably because of your genes.

Yet while MPB is extremely widespread, the way it alters the appearance of your head can differ from person to person. Fortunately, a doctor called James Hamilton devised a seven stage classification system for identifying the stages of MPB—which was later revised by another doctor, O’Tar Norwood—which has come to be known as the Hamilton-Norwood Scale (HNS). 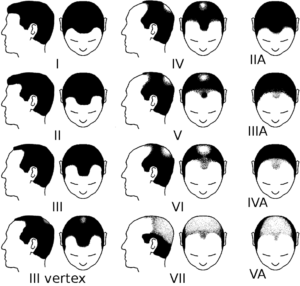 We won’t break down the stages in their entirety, but we will say that Stage 2 represents a slight recession around the temples, Stage 4 details a severe recession and a bald patch on the crown, and stage 7 means only a band of hair around the sides and back of the head remains.

While the accuracy of the HNS has been disputed by dermatologists and hair loss experts the world over, it does serve as a useful template for pinpointing the severity of your hair loss, and as an indicator for how effective hair loss treatment may be for a particular individual.

Other Forms of Hair Loss

As mentioned, the HNS only details the stages of hair loss related to male pattern baldness. If your own hair loss doesn’t chime with any of scale’s seven stages—it may be patchy or extremely rapid, for example—then you could be experiencing hair loss caused by something other than MPB. Before we take a look, we just want to remind you that the forms of hair loss listed below are very uncommon, so if you think you’re experiencing them, be sure to consult your doctor!

Stress is the worst. And because many of us are now finding that our work-life-balance is being eroded by emails at 11pm and meetings that could have been an email, it’s on the up.

This is bad for your barnet. Stress plays havoc with your hormone levels, propelling hair follicles into a state of serious vulnerability. In extreme cases, stress is also linked to a psychological condition called trichotillomania, which involves the compulsive pulling of your own hair.

Unexpected or unusual hair loss—like patchy hair loss—can sometimes be a side effect of a serious health issue. Thyroid disease, autoimmune disease, fungal infections, lupus, diabetes, anemia and eating disorders have all been linked to hair loss. The medicines and treatments used to combat disease can also cause hair loss; most notably, radiation therapy and chemotherapy used in cancer treatment.

Unsurprisingly, fire can lead to hair loss. Usually, any hair you’ve inadvertently scorched will grow back, but if a burn leaves a scar where hair used to be, then the hair is gone forever.

Excessive grooming should also be avoided. While bleaches, perms, straighteners and braiding won’t cause you to go bald, getting them on a regular basis can damage hair in a way that makes it appear thinner.

hair loss
hair loss causes
hair loss solutions
hair loss treatments
illness
receding hairline
stress
thicker hair
This information is not intended to be a substitute for professional medical advice, diagnosis, or treatment. It should never be relied upon for specific medical advice. If you have any questions or concerns, please talk to your doctor.
You might also like 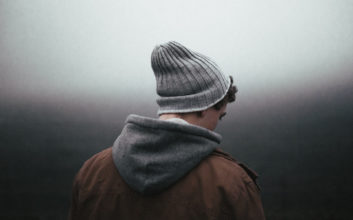