So you’ve noticed a gradual thinning of your hair, and you don’t fancy “Rocking” the Dwayne Johnson or Jason Stratham. You’ve decided that prevention is better than the cure, and would like to actively do as much as possible to help your locks. Investing in a top quality shampoo seems a sensible idea. The problem is most men are fed so much information and choice, that searching for the best option really is hair-pulling stuff.

So let’s dispel the myths and get to the roots of the science for a fuller, stronger head of hair.

DHT (dihydrotestosterone) is an androgen (type of male hormone) made from testosterone that shrinks hair follicles and causes male pattern baldness. The sensitivity of hair follicles to DHT is what causes hair loss.

Too Cool for Decaf

Most people start their day with a fix of caffeine to wake them up, similarly caffeine has been shown to help stimulate hair growth. An in-vitro study conducted by Fischer et al. showed caffeine administration topically lead to greater hair shaft growth and a longer hair growing phase, when compared to the “no caff” group (1).

Applied topically, it’s a promising route of drug delivery for the caffeine molecule, as it penetrates easily into the hair follicles. It’s thought it binds to DHT, the main culprit that fuels hair loss and drags it back at the hair follicles, thus allowing hair to grow normally (1). Indeed, caffeine not only lifts up your energy, but it also stimulates hair follicles to make more energy supporting its growth (2). Who said hair was dead?

Most people start their day with a fix of caffeine to wake them up, similarly caffeine has been shown to help stimulate hair growth.

In the UK, two treatments have been clinically licensed to help hair growth, finasteride (prescription oral tablet) and Minoxidil (topical solution). However, a recent study has concluded that caffeine-based topical liquid should be considered as similar in effectiveness to minoxidil 5% solution in treating male pattern hair loss (3). In a different study, the addition of topical caffeine with minoxidil is shown to supplement the hair loss reducing magic when compared with minoxidil topical solution alone (4). So, there is definitely “a latte” love for caffeine as an add-on treatment for hair loss.  But what are the side effects? Some people may experience mild scalp irritation but it’s really not common at all.

Saw palmetto is a palm berry extract and is nature’s answer to hair loss. It’s traditionally been become a popular natural choice for men looking to minimise certain anti-androgen drug use (such as finasteride) or the side-effects associated with them.

Saw palmetto is a palm berry extract and is nature’s answer to hair loss.

It primarily works by trying to prevent conversion of testosterone into DHT which is accountable for male hair loss. This powerful extract has been shown in studies to boost hair growth by suppressing the effects of DHT, lowering its “evil” hair loss effects (5). In 2012, scientists compared the effects of saw palmetto with the effects of finasteride. Their work was published in the International Journal of Immunopathology and Pharmacology. Though the researchers indicated finasteride is more effective than saw palmetto in increasing hair growth, both had a positive effect. Over a period of two years, 38% of those taking saw palmetto saw increased hair growth, compared with 68% of those using finasteride (6). This is great considering the very low side effect profile of saw palmetto compared to finasteride (7). This quite a novel substance that has shown to be promising in research.

Biotin and Your Hair Mojo

Also known as vitamin B7, biotin is a water soluble vitamin that is readily available in many foods like eggs, fish, meat, seeds, nuts, and certain vegetables (such as sweet potatoes). So what’s the science behind biotin? Basically, it’s an essential building block in producing keratin which is a structural support protein that makes hair (8). Think of it as the bricks and mortar of your hair structure, giving you improved hair elasticity so you can really get your hair mojo back into gear!

We recognise life can be very busy and stressful for men in modern society and getting the correct nourishment can be challenging. Some hair loss can be attributed to biotin deficiency, so every bit helps. We encourage wellness here at Manual, and although topical treatment is supportive – a good diet and lifestyle is really where it’s at. So is biotin a miracle cure for hair loss on its own? The answer is ‘no’, but as part of a combined treatment therapy it can prove to be valuable.

Shampoo. Supercharged. We. Have. Lift-off.

At Manual, we feel passionately about taking every opportunity to help men with hair loss and thinning. As most men shower once a day, this is a great chance to help improve hair quality through the best ingredients science has to offer. So we have formulated a new and novel shampoo that has all 3 ingredients; caffeine, biotin and saw palmetto together, to be used alone or as part of our other hair products, to get the results you want. 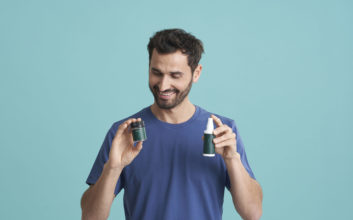 Getting a Hair Transplant vs. Using Finasteride & Minoxidil

Minoxidil Side Effects: What You Need to Know