We’re proud to talk about the journeys of men in the Manual community who have kindly shared their story of using Finasteride. We’ve seen some incredible before and after pictures, and here we want to shine a light on the real-life effects of hair loss treatment. This brings it all home: Finasteride really works, and it can be a game-changer for men who are experiencing Male Pattern Baldness.

Finasteride is a clinically-approved treatment for hair loss. 9 out of 10 men who take Finasteride grow more hair or stop losing it as quickly as they were prior. It is a tablet taken once daily that stops the conversion of testosterone into Dihydrotestosterone (DHT) by targeting the 5-alpha reductase (5AR) enzyme. DHT is a hormone that shrinks hair follicles, and it is the leading medical cause of MPB.

Finasteride is a viable and vastly cheaper alternative to hair transplants, and can be used in conjunction with other medications such as the spray Minoxidil (Regaine) to improve overall effectiveness, helping you to well and truly beat the bald.

Luke’s Finasteride Treatment: Before & After

Luke, 21, is a member of our community who shared his Finasteride story with the Manual team. He shows the dramatic difference between before and after signing up to the Manual Hair Loss Plan, and what effect the treatment can have on thinning hair. 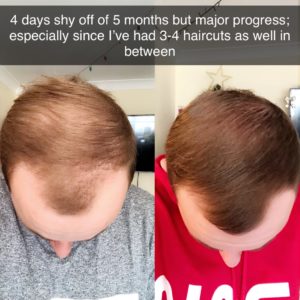 Rather than giving up and accepting his early Male Pattern Baldness (MPB) diagnosis as the beginning of the end, Luke adopted our Finasteride plan just 5 months ago, and he has already seen fantastic results.

And instead of opting for an expensive hair transplant, Luke has reinvigorated his hair growth cost-effectively and without the pain and hassle of surgery. He recently added the topical Minoxidil spray to his treatment regime and is looking forward to further regrowth over the next few months.

Losing your hair when you’re young can be traumatic. Luke’s hair was understandably important to him – as it is for most men of all ages. But being a 21-year-old student out on the dating scene, he really wanted to look his best. Luke had shaved off his hair during his teens, after being teased about his thinning locks since the age of 14 – but he wanted to take action that would improve his situation.

For Luke, it seemed like MPB wasn’t exactly a priority for his GP. When he went to his local surgery, he was met with the age-old attitude of “if you’re going bald, you’re going bald.” Being dismissed like this led him to register with a new GP, and he was eventually referred to an NHS dermatologist. Soon after, he was diagnosed with MPB and pointed in the direction of Finasteride.

This was a step in the right direction but initially Luke was concerned by the potential side effects. This changed when he stumbled across one of Manual’s online promotions and saw that the vast majority (over 98%) of men continued to use Finasteride (in official trial data) because they’d experienced no negative side effects. And if he was one of the unlucky ones, he knew he could simply stop taking it.

Luke decided to take the plunge, and the rest is history… well, not exactly history, because the best results are expected after about a year of use – so he’s just half way to optimal growth!

The brilliant “before and after” pictures speak for themselves, showing the results of Finasteride: 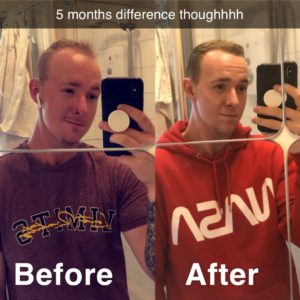 Despite his early worries, Luke has experienced no adverse side effects whatsoever. Since starting his treatment, Luke has gone from making the most of his visibly-thinning hair to actually enjoying a hairstyle that he wants. And as we mentioned, this is a mere 5 months after starting Finasteride. Most men will see the most significant results after approximately 12 months.

Luke’s story is a stark example of the profound and life-changing effects that simple treatment of MPB can have – without resorting to the more expensive and drastic alternatives. As a thank you for sharing his experience, we’ve sent Luke some caffeine shampoo to keep his locks in the very best condition.

Thank you, Luke, for sharing your success story with us. We wish you a happy and hairy future!

This powerful combo promotes hair growth by blocking DHT - a hormone linked to hair loss - and by increasing blood flow around your follicles. Works for 9/10 men.
Start from £28

Life is different before and after Finasteride. Men can turn a corner in their hair loss journey, and we’re delighted to share positive news of that happening in real life. We hope these examples will inspire you to get those pesky hair follicles to work for you, rather than against you. You can change your situation.

Finasteride
hair loss
This information is not intended to be a substitute for professional medical advice, diagnosis, or treatment. It should never be relied upon for specific medical advice. If you have any questions or concerns, please talk to your doctor.
You might also like 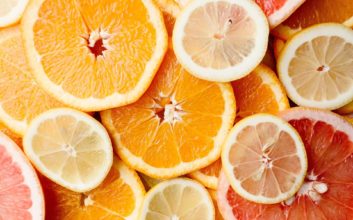