“I just assumed it would grow back”

Before his late teens, Leo wasn’t too bothered about his hair. In his words, it was “just something to brush.” But at around 16 or 17, he started bleaching it, dying it different colours, and styling it to reflect his personality. Shortly after, he started to notice a problem: it was getting increasingly thin.

Leo put this down to the fact he wasn’t taking enough care of his hair, assuming if he stopped bleaching it, it would grow back. But even after trying to be more careful, Leo could see a lot more of his forehead than before. It was alarming. He’d envisioned hair loss when he was 35 or 40 – but he was just entering his twenties and it was also getting thin on top. This began to knock his confidence.

“When you start to lose you hair, you feel like you’re losing a part of you”

Finding an Answer to Hair Loss

Leo knew he needed to try a new approach, so started researching. He found out that experiencing Male Pattern Baldness (MPB) in your twenties is common – but it’d continue to worsen if he didn’t take action. Then he found Manual. The website was easy to navigate and the information was useful, but what struck him most were the reviews. 9/10 men saw great results, so figured he’d give it a shot.

The Results of the Complete Hair Loss Plan

Leo has been using Finasteride and Minoxidil for just over a year, and his hair is now much thicker. It didn’t happen straight away, and for a while he wondered whether it was working. But he’d taken photographs at intervals, and could see wispy hairs where previously there weren’t any. This, he realised, was his hair growing back. Since then, he’s seen continuous improvement – with noticeable differences at six months, then eight, and then really great results after a year.

Leo’s advice to others is to approach your hair regrowth routine like the gym. In his words, “you wouldn’t go to the gym once and go, “why am I not extremely fit?” You’ve got to keep at it!”

“Keep at it and you will see results”

While most of us expect some hair loss as we get older, fewer people know MPB affects 30% of men by the age of 30. Leo’s experience is surprisingly common, but knowing you’re not alone only helps so much. For many men, the future looks like a stark choice between expensive (and painful!) hair transplant surgery, or losing their hair – but there is another route.

Manual offers treatments using Finasteride, Minoxidil or a combination of the two. These have been studied extensively and trialled on thousands of men, and the results speak for themselves: Finasteride proved effective in 85% of men in clinical trials, while over two thirds of men taking Minoxidil saw an improvement in hair growth – and combining the two boosted their effectiveness to 90%.

Leo built hair loss reversal into his daily routine. It didn’t happen overnight, but the results are impressive. His advice to approach the health of your hair as you would your fitness regime not only rings true, but it’s something we passionately believe in: with all aspects of health, it’s about taking manageable daily steps to improve your habits.

We’re grateful to Leo for sharing his experience. Keeping motivated is an important part of successful treatment, and his story is proof of the payoff.

The plan that Leo chose. He opted for maximum results by combining Finasteride & Minoxidil – a combo that works for over 9 out of 10 men. 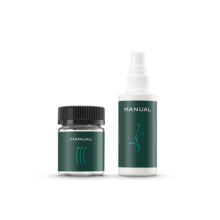